Friday marked the end of my most recent Online Coaching block.

For those of you who don’t know, my Online Coaching program is one of my services, in which I aim to give people the tools in which to nourish their bodies properly and exercise effectively. ‘Blocks’ are 6 weeks in length and by the end (assuming the individuals do as I say) all involved become leaner, stronger, fitter and more confident than they were before.

Whilst there are, and have been, many experienced trainers (including a few qualified personal trainers) on the program, the main premise is to ensure that those at ‘beginner’ level understand what they should and shouldn’t be eating and how they should and shouldn’t be exercising. I aim to educate so as, after the block is over, the participants can ‘go it alone’ and continue to work toward their goals without having to report back to me on the regular; although many chose to renew, in order to maintain the accountability…or because they’re afraid they’ll miss my patter. One or t’other.

With that in mind, gym newbies walk into the gym for the first time and generally feel intimidated in their new surroundings. However, as the weeks go by, they become more and more comfortable and then start to pick up on the small things that annoy, and have always annoyed, gym users the world over.

Below is an account of five annoyances one of my female Online Coaching clients encountered during her first 6 week block. She raises good points, but underneath each of her points I have intervened and thrown my tuppence worth in; in order to balance out the argument a little.

“So, in addition to my quite pleasing measurements, I wanted to share with you my top five annoyances having spent so much time in the gym, specifically the weights area. Spread these as you see fit (or not at all) as I hope some people might pay attention to them…. In no particular order….

1. If you come to the gym to go for a cycle on an exercise bike, one piece of equipment you do NOT require is a book or newspaper.

I wholeheartedly agree with this one and, therefore, will move swiftly on.

2. If you have to scream and grunt on every rep, in my opinion, it’s too heavy for you. Keep the noise down.

I kind of agree with this point.

I say ‘kind of’ because I have witnessed a lot of characters in my time who make a ton of noise, unnecessarily, purely for the attention of those around them. However, I have also witnessed people lifting weight that they would never have been able to lift without emptying their lungs in the process. I’ve seen members do it, I’ve done it and many, many of the clients I’ve trained have done it during their sets.

Generally speaking, there’s two guilty parties when it comes to this ‘offence’:

1) The perma-tanned males with their hair done perfectly, wearing colour coordinated clothing who spend more time texting and flexing in front of the mirror than they do training and only seem to pick up the noise levels when there’s hot girls around.

It’s my opinion that these creatures are monstrosities and should be banned from all gyms…and from life as well, actually.

2) The beasts/focussed ones who train with an evenly matched training partner or someone a lot stronger than they are. They keep their hood up, earphones in and have their music blaring. The chances are these guys/girls are so focused and ‘in the zone’ that they don’t comprehend – or even care about – who or what is around them. They’re in there to go 100% in order to maximise their results.

[youtube=http://www.youtube.com/watch?v=pTXGI3F6vzk]
(When big weight gets shifted, big noise gets made.)

I like those guys/girls and think the more of them there is in a gym, the harder the efforts will be from those around them. The weak will find a new gym that’s full of quiet and inoffensive people and probably never achieve anything, whilst the strong will step their game up and ensure that they make involuntarily noises when lifting in future. Iron sharpens iron, people.

NOTE: I actually found myself guilty of this last week. I had my earphones in with a motivational Eric Thomas/Anthony Robins/Al Pacino ‘Any Given Sunday’ type playlist in and I was going hard. I only realised how loud I was grunting when I caught people looking at me as I paced up and down the gym floor during my minute rest period muttering “f**k, f**k, f**k…” ‘under my breath’.

Once I took my earphone out, I realised it wasn’t quite as under my breath as I had initially thought. Luckily, the members all know who I am and, as there were hardly any people in the gym at the time, they understood that I was just working hard; as opposed to trying to show off/seek attention…I think.

3. Please put equipment back when you’re finished with it. Mainly so that I don’t look like an utter tool wandering around looking for stuff. Thanks. 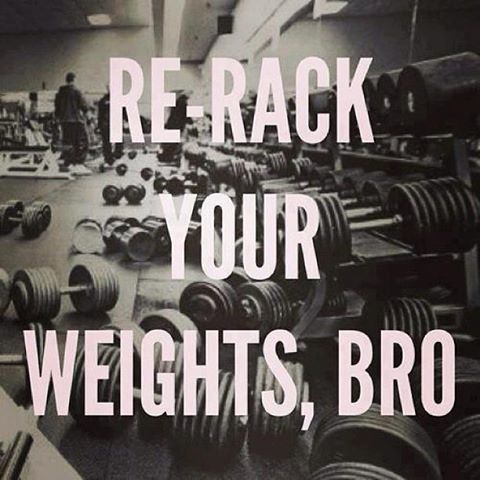 I don’t think anyone in the world would disagree with this one.

Every session I do, whether I’m training clients or training myself, I have to wonder near and far to find a matching set of dumbbells. It wastes time and it raises my blood pressure.

I guess it’s the gym’s fault though.

In my opinion, every gym should have a member of staff on the gym floor at all times, making sure people are ‘behaving’; i.e. putting dumbbells and plates back where they got them and not spending half-an-hour texting between sets on the bench or squat rack.

How about we implement a worldwide rule of thumb where an individual who doesn’t re-rack their dumbbell gets it dropped on their pinky toe by the person who had to run around in circles for ten minutes to find it?

4. I’m all for guys and gals being healthy and toned but when guys get to the stage that they have no neck and can’t put their arms by their sides, again in my opinion, they’ve gone too far. Are they really going to maintain that for the next 20, 30, 40 years? Doubt it. Also, don’t wear vests that look like thongs. It’s not a good look.

I wholeheartedly disagree with this one – albeit, I know why the statement has been made. I also noted that my client said “in my opinion”, and that’s the most important factor in my following speil:

Looks are subjective, it’s as simple as that. 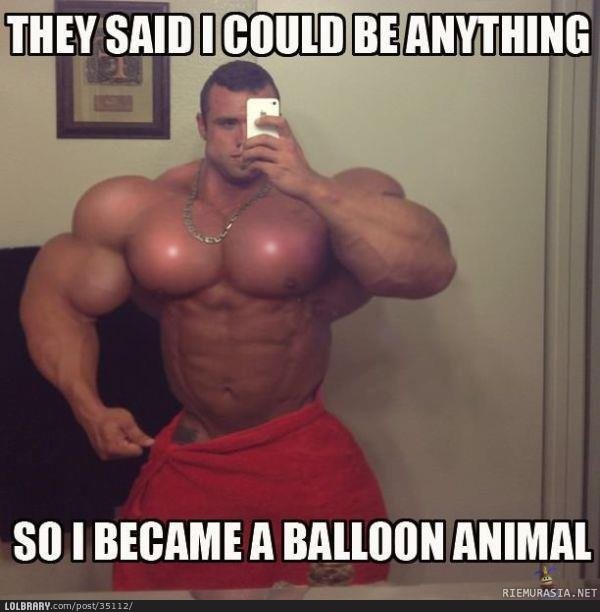 I’m of the opinion that if the person is happy, let them get on with it. If someone wants build their body until they are the human equivalent of the Incredible Hulk, cool, good luck with the journey. On the same token (but opposite direction), if someone wants to become so fat they can’t get out of bed and then continue to be fed through an IV drip so as they can gain more weight*, cool, good luck with the journey.

The bottom line is that different things make different people happy, but happiness is the end goal every single person on this planet is chasing. Whether you agree that someone looks ‘good’ or not is absolutely irrelevant. They’ve got goals and are going after them in order to improve their happiness. Leave them to it, whether you agree with what they’re trying to achieve or not.

*Yes, that shit actually happens. And believe it or not it’s a sexual fetish. No, I’m not joking.

Regarding the thong tops, when someone grafts and achieves a physique they’re happy with, I’m all for them showing it off. In fact, I’m guilty of only training in spandex (yes, tights as well as tops) and so it’d be hypocritical for me to lambast someone for their workout attire. To each their own, as they say…whomever ‘they’ are.

5. When you finish your set, don’t drop your weights or just let them fall. Again, keep the noise down. If it slips from your grip, fair enough but don’t chuck weights about. You’re not cool.

I’m with you on this one.

This ties in nicely with the grunting debate; if the individual is going after a new one-rep max, the chances are they’re going to make a lot of noise in the process, but that’s a huge achievement for anyone so let them get after it. However, if someone is preacher curling a 10kg dumbbell and drops it to the floor once his/her (most likely to be ‘his’ but there’s no sexism on this blog) set is complete, that individual deserves to ritually beheaded, with a blunt object, in the middle of the weights room as an example of what happens when such behaviour is exhibited.

The other obvious exemption is when someone is working on Olympic lifts, but most commercial gyms don’t have Olympic platforms so most of you needn’t worry about that.

If, however, you’re in a gym with a platform, expect to hear some loud noises as athletes press weight above their head, let it go, watch it fall to and bounce off of the ground, before picking it back up and repeating the process for their prescribed sets and reps. These guy/girls aren’t showing off, though, they’re working towards their goals and limiting their risk of injury. The noise of the barbell crashing to the floor is a necessary evil, I’m afraid.

There you have it. Five things that annoy the hell out of a gym newbie and the opinion of a trainer who spends the majority of his waking hours on the gym floor.

Be sure to chime in with your thoughts on the matters discussed. It’d be interesting to hear your opinions; whether you’re a gym newbie, an experienced gym goer or even another trainer/coach.