Two years ago today I got the keys for what is now Improve Glasgow.

At the time of opening, we were predominantly a 1-to-1 Personal Training business, with two coaches (one being myself) and an intern.

We decided to open our own place because we simply felt that we could no longer deliver the level of service we wanted to, and that we expected our clients to expect from us, in an overly crowded commercial gym. (Nae disrespect to Future Fitness, it’s the best commercial gym in Glasgow; we knew we had to have our own house so we could continue to grow.)

I was running a bootcamp in Clarkston at the time and figured that by simply merging our bootcamp with our 1-to-1 business that we’d be laughing. We’d then add small group Personal Training and the fitness world would be ours.

Unfortunately, yet annoyingly obviously with some hindsight and a bit more experience, nothing runs as smoothly as that.

Over the past two years we’ve changed things numerous times:

There’s been times there hasn’t been enough dough left at the end of the month for me to pay myself and there’s been other times I’ve been on the receiving end of unexpected bills that I was sure were going to put us under.

“I’d be better off getting a job flipping burgers at McDonalds. I’d work less hours, get paid more and wouldn’t have to think about anything once I walked out the door.”, I’d often think to myself.

Thankfully, I held on tight every time, faced the challenges head on and overcame them.

It’s been nowhere near as easy as I thought it’d be, but there’s certainly no doubt in my mind that I’m doing exactly what I want to do with my life.

We now go into our third year in our strongest position to date and with our clearest vision for the future.

That doesn’t mean it’s plane sailing from here on out – far from it. It means that there’s even bigger challenges ahead as we attempt to push forward and grow.

I speak to a lot of other trainers about the business side of the industry, I speak to people involved in other industries about commonalities and differences, and I speak to a bunch of people who aren’t necessarily involved in business but find the goings on interesting.

I figured I’d put some of the lessons I’ve learned down on paper in the hope that someone finds it interesting.

Who knows, but here goes (in no particular order):

Equipment matters a lot less than I thought

Space is king in any gym. We’ve gone from trying to pack the place with cool toys to trying to throw stuff out for the sake of a few precious more square feet.

Gyms need to be full of people, or at least have the capability to handle more of ’em, not fancy (or unfancy) kit.

The key to Personal Training isn’t to know the ins and outs of anatomy and physiology (although it’s certainly useful), it’s to give a shit about the people you’re coaching and be prepared to bend over backwards to ensure their whole experience is as flawless as can be.

The more you care the more you’ll seek to learn so as you can help more…and so the positive cycle continues.

Any good business runs off systems, but at every growth stage the systems break

You can then either paper over the cracks and allow the ship to sink or you can go back to the drawing board and start again.

The latter takes more time, energy and effort, but that’s the difference between sinking and swimming.

There’s no such thing as a perfect program

You can program off percentages, for energy systems, based off rep ranges and a whole host of other factors, but you’ll have to change just about everything in every session you run.

Someone’s back is always a bit niggley, someone’s always got a bit of a sore shoulder, someone else has always had some sort of operation/previous injury.

A program is simply a structured template that has to be coached around. This is the difference between coaching and ‘fitness instructing’.

1-to-1 Personal Training and large group training are both very difficult to scale.

Large group-wise, the retention rates just aren’t high enough to rely upon. Programming has to be simpler to coach, space needs to be utilised ninja-ly (yup, I made up a word) and individual attention to detail needs to at a higher level than most coaches are capable of so as to keep injury rates as low as possible.

The sweet spot lays somewhere in the middle.

Add a flexible training timetable, top-class coaching, a ton of laughs, individualisation as close to 1-to-1 level as possible and essentially 4 sessions for the price of 1 and you could just about have something that’s scalable.

(Big shout out to Jean-Claude Vacassin for opening my eyes to this as I was, without doubt, heading down the sure-fire failure path before we met.)

You’re never as good as you think you are

Every time I think we’ve cracked it and are just about to take a dramatic growth spurt, something comes up and bites me in the ass.

It’s equally frustrating and humbling, but ensures that I’m now always on my toes. As soon as I take my eye off the ball, even if only for a day or two, we lose ground.

I’m too slow to make changes that will inconvenience people

Even when I can see things coming that are going to have a detrimental effect on the gym/business, I sit tight, ride the wave and right the wrong after it happens.

It’s a tricky balancing act to get right.

That said, I do hope that I become more hard-nosed and decisive as I gain more experience.

You can always work harder and sacrifice more

There’s 24 hours in a day – if you’re not willing to work 16 of them, plus weekends, running a business isn’t for you.

Sure, you can be self-employed and earn a few fun tokens, but when you want to make a difference and have other people’s livelihoods depending on your output, you better be prepared to put in the hours.

As time goes on, things get a bit easier and the less needs to be done/more is outsourced/delegated…but that’s when the trigger needs to be pulled for expansion/growth and it’s back to square one again.

Self-doubt never leaves, but you can’t let it win

Should I spend £X on this new bit of kit? Should I hire a new coach? Should we bring in a new intern? Should we expand into a bigger facility?

And if we’re not growing we’re dying.

Owning a business means you have about ten different jobs

Until you’re at the fortunate position of being able to afford the wages of ten people, as a small, independent gym owner you’re going to be undertaking the daily responsibilities of the following roles:

Admittedly, I fulfil some of these roles a helluva lot better than others, but the thing I love most about my ‘job’ is that it’s ever-changing.

The skills I’ve learned over the past two years are the foundation for the progress we’ll make in the next two and beyond.

Of course, you have to lead, make decisions and orchestrate, but the key to the daily functions of any business (certainly ours) is to have a team who not only love what they do, but know that you respect and care for them.

I believe that that attitude, along with trying to make the ‘workplace’ as positive and laugh-filled as possible, to be the reason our team gets on as well as it does. And I feel that both Ally & Rachel’s Facebook posts yesterday highlight this point well. 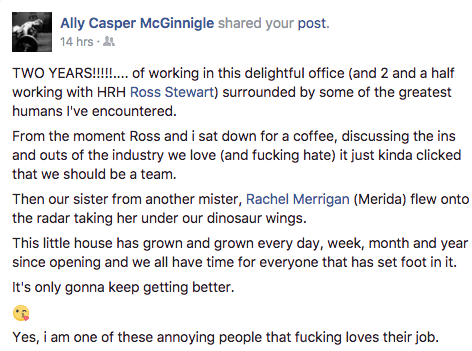 Of all the things that have happened over the past two years, it’s the strength of our team I’m most proud of. It’s the aspect (being a manager/boss/leader) I knew least about before opening the gym and, quite frankly, it’s the aspect I’ve ‘winged’ the most, but I think I’ve gotten it about as right as I could have done.

I’ve got a good idea of what’s going to happen next and I’m both excited and nervous.

Excited because I know we’ve got the ability to make positive and impactful change on not only people’s lives but on an industry on both the local and national stage.

And nervous because at every step of the way, I know my character, resilience and commitment are going to be tested.

I’m up for the battle and can’t wait to look back in another two years time with a helluva lot more progress to show off and even more lessons to have learned from.